Gooooaaaalllll:Teaching Your Dog to Play Soccer 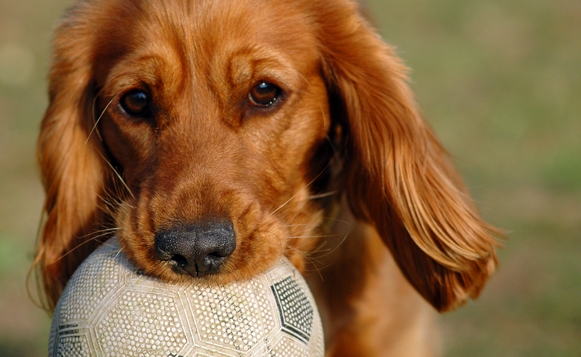 I recently spent a month traveling and meeting with dog and marine mammal trainers in Spain, France, and Mexico. It was in Spain that I first witnessed signs of “The Fever.”  I soon learned, however, that The Fever was a worldwide phenomenon. I returned to the U.S. to find Americans had The Fever, too.

I know I caught it, but don’t worry. It has nothing to do with barnyard animals, although I think it is a virus.  We call it soccer, they call it futbol, but it has the same symptoms: an uncontrollable urge to play, watch, and be part of the excitement of the World Cup

As a dog trainer, I thought it was only fitting that I share the fun with my Labrador Retriever, Quill. When I brought out the soccer ball, she immediately tried to put it in her mouth. This is not exactly conducive to a good soccer game. I needed to teach her to use her nose and paws instead.

My first order of business was to reintroduce her to the clicker. A clicker is a small noisemaker that you click when the dog performs a behavior you want to encourage. It signals to the dog, “I like what you just did, and food is on the way.” So I clicked and fed her repetitively until she understood that the click meant food immediately follows. Mission soon accomplished.

Next, I took her to a quiet spot in my office. I placed her on a down stay, sat on the ground directly in front of her about two feet away, and calmly rolled the soccer ball toward her. If she reached toward the ball with her paw, or better yet touched the ball with her paw, I clicked and immediately placed a treat on the floor in between her paws. I wanted to deliver the treat to a comfortable spot so she would not be tempted to get up.

After a few repetitions she began to understand that touching the ball made the click sound and that food would soon arrive. (You don’t have to be fast with your food delivery, just make sure that you click at the exact moment your dog touches the ball so that he or she understands what the reward is for). Soon Quill was eagerly lifting her paw to touch the ball and make it roll.

I had taught her to use her paw to roll the ball and now it was time to help her use her nose. I went to a new quiet location and placed the ball calmly on the ground. I stood up this time instead of sitting down. With my foot on the ball to prevent it from rolling around, I waited until her head dipped toward the ball and then I clicked and rewarded her by dropping the treat on the ground away from the ball. This time I wanted her to move a little away from the ball to eat the treat so that she had to return to the ball to start over. When her head once again dipped toward the ball, I clicked and rewarded. Then I upped the ante by only clicking and rewarding when she touched the ball with her nose, not her mouth. That was enough for the moment. I wanted to stop while she was still having fun.

Later that day, I repeated the above two exercises, always clicking when she touched the ball with her nose or paw, but tossing the treat away from the ball so she had to start over from a distance. Once she understood that I wanted her to paw or to nose the ball, she was ready to move on to rolling it. I took my foot off the ball and clicked and rewarded when the ball rolled, no matter which direction it went, and always threw the treat a short distance away from the ball. Lesson ended.

Next day, ball on the ground, Quill was eager to resume the game. As soon as she was happily rolling the ball with her nose and paws, being rewarded each time with a click and treat, I began to click and reward only when she attempted to roll the ball toward me. Now I could roll the ball back to her. Soon the click and treat was unnecessary because the work itself was so much fun. We were now a team and ready to play. Game on!

It’s best to play soccer with your dog on very short grass, as it is difficult for the dog to nudge the ball if the grass is too high. If the surface is too smooth the ball is going to move too quickly. You may need to experiment with surfaces to see what works best with your dog.

I guarantee you that playing soccer with your dog is a blast. Oops!  I think I just infected you both with The Fever.

Bonnie Brown-Cali is the owner of Dog Dynamics, Inc.; 925-229-8200), offering both group and private instruction in the Orinda and Walnut Creek area. She is a field representative for Paws with a Cause, which trains service dogs for the disabled, and has worked as a canine field handler for the University of Reno, Desert Research Institute and for Working Dogs for Conservation Foundation.